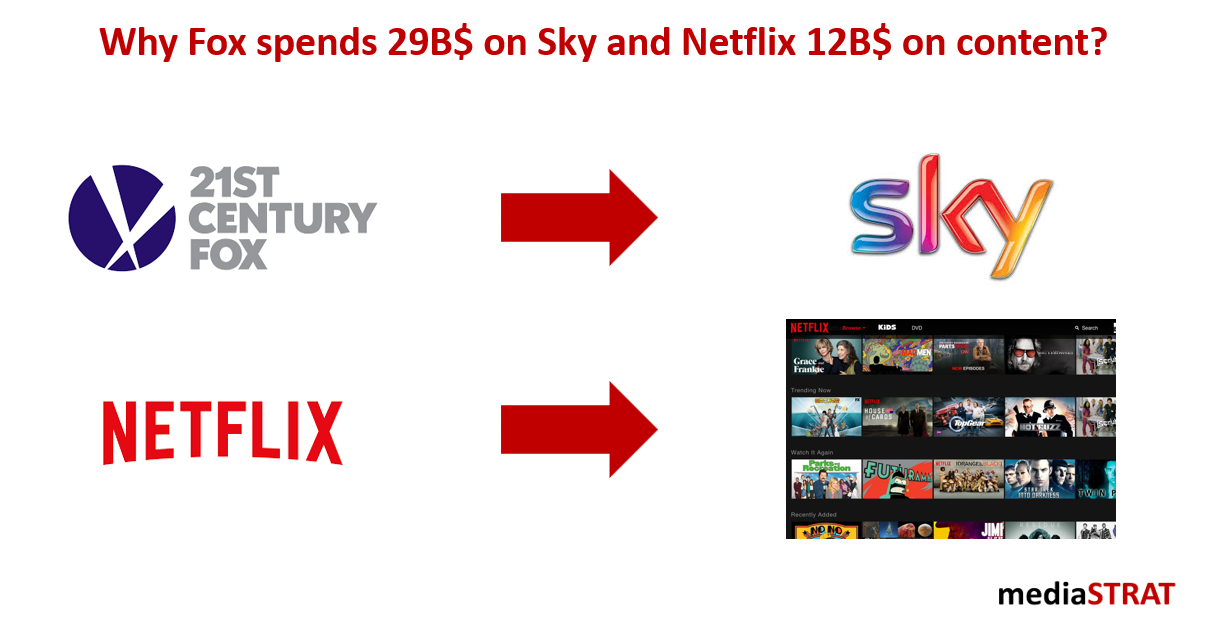 According to the Economist Netflix is planning to spend over 12B$ on content while Murdoch’s 21st Century Fox has just increased its bid to 29B$ on the remaining 61% of Sky it still does not own. Even if from a viewer’s perspective both groups provide paid entertainment these parallel announcements depict different strategies and positioning in the media food chain.

Reduce dependence on US domestic market

Despite their status as global media groups Comcast NBC-U and to a lesser extend Disney are still very dependent on the US domestic market. As opposed to the US Pay TV that lost about a million subscriber in a year the European market is still slowly growing. Even with increasing churn rates Sky brings a significant 23M European subs to the table.

In a time of skyrocketing content costs and diminishing ad carriage revenues global media groups need to sustain their historical business, stop EBITDA erosion to satisfy shareholders while investing in new distributions models. This leads to difficult arbitration on investments.

Sky’s decision back in March to bundle Netflix into its subscription pack and provide a unified content access demonstrates that their core value proposition is to be an aggregator alongside being the place to watch football. Sport is still their prime subscription driver in a time where Telecom operators, Amazon, DAZN, mediapro, beINsport are seriously challenging them.

Please refer to my previous article on the consequences of the loss of football rights on Canal+ to understand why the threat is so serious and Sky does not want to be squeezed between operators and content centric companies.

Fox’s increased bid must be analyzed in the light of the merger war between Comcast and Disney as well as the role it is likely to play in the new eco system Disney is currently building.

Netflix that started as a pure aggregator, almost inventing S-VOD the last distribution window of content chronology, has been forced by the major Hollywood studios to become a content producer.

It has no legacy business and is mainly focusing on growing its subscriber base globally. After a period of content volume reduction, it is poised to widen its content value proposition to avoid churn and limit the multi subscriptions wave. Originals that now represents 85% on its content spends are also at the heart of their marketing strategy and became both a discussion topic around the world and a key driver for new subscription.

The success of Netflix’s business model depends of its ability to continue its growth to leverage its astronomical but almost fixed content spends despite being already almost global outside China.

As opposed to traditional media groups that fight for market share Netflix and Amazon are after total domination.

1+1>2: How to create value after broadcast vendor M&As

The NAB show period is favourable for merger announcements and rumours. This year is no…