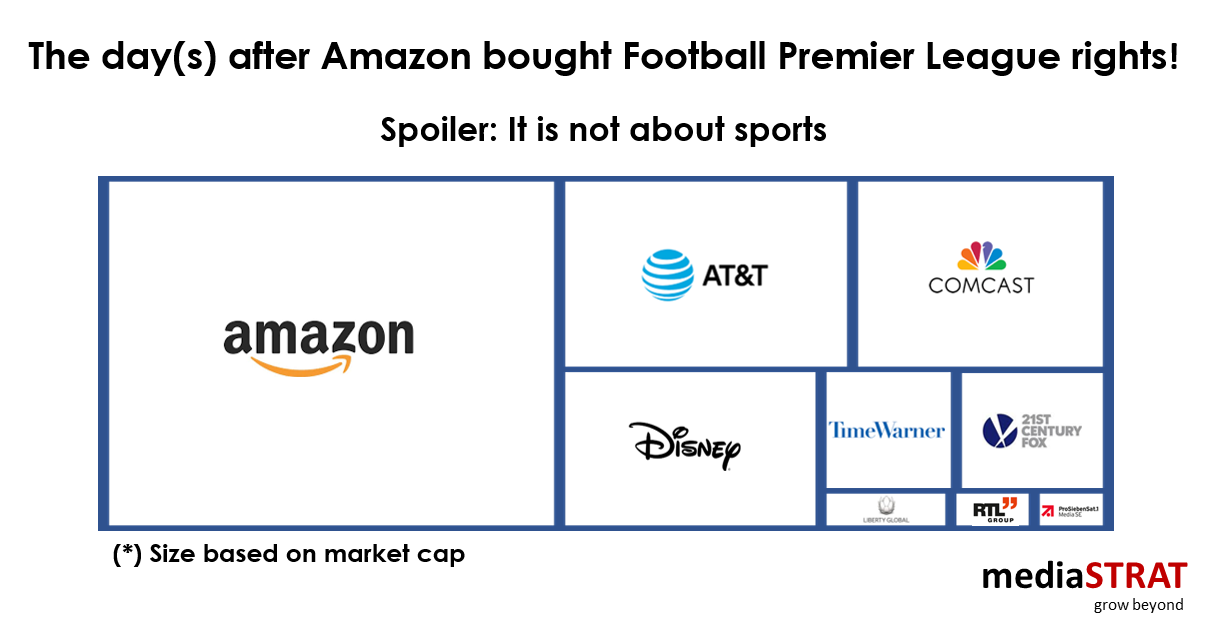 Spoiler: It is not about sports

“What’s next after Canal+ loss of football rights?”

I concluded my June 1th post by writing: There is no question that Amazon has the platform, the subscriber base and the marketing dollars to become the absolute champion in the Sports arena but will they want it (or when). Less then a week later we have the answer!

When in the future we will remember the important milestones of the transformation of the broadcast media industry, it is likely that June 6th, 2018 when Amazon bought some rights of the UK Football Premier League will be on that list alongside December 14th 2016 when they went global and made Amazon Prime Video available in more than 200 countries and April 5th 2018 when they acquired Tolkien’s rights for 250M$. I can’t wait for the next ones: maybe the acquisition of MGM, Paramount or even Sony Pictures, a mega merger with a Chinese company…

The fact that starting 2019 the First league rights will be shared between a media company Sky (with a huge “For Sale” sign badge), a telecom operator BT and a universal retailer Amazon is in itself an evidence of the ongoing tectonic changes.

As president Ronald Reagan started the Star Wars program back in 1983 it had less to do with protection against ballistic missiles then a way to push Russia into an artificial race that would jeopardize resources that would have been needed in other parts of their economy to reduce dependency on raw materials.

Similarly, Amazon investment has less to do with immediate ROI through increased ARPU then further extend the time consumers are spending in their eco system and the plan to become the single one stop shop for consumption and entertainment in everyone’s home.

It is not a new phenomenon and even if football is the only sports that significantly drives subscription it is mainly a driver for something else. beIN SPORTS went at war against Canal+ and others in non-Sky territories paying amazing amounts to acquire sports rights. The strategy is primarily driven by Qatar’s long-term vision to change the world’s perception on the country and reduce its dependency on oil and gas.

The ESPN financials demonstrate how dramatic the skyrocketing sports rights have on the balance sheet of a long-standing media group when churn rates increase as younger viewers media consumption change.

Cable and telecom operators must make the decision if they want to be market place for third party value add services and live on rev share and carrier billing or build an entire quadruple play service. Amazon is doing both. From their original market place strategy, they evolved into a combination. They significantly increase their own media offering as they do for other product categories. This encompasses everything from creating and licensing exclusive content, owning the platform with the value add brought by tech companies like Elemental down to owning the delivery network through their CDN and ultimately becoming an operator themselves. At the same time, they are an aggregator both for individual content through their T-VOD and EST offering as well as aggregated offerings under the Amazon channel umbrella.

Amazon do not aim for an increased market share but at total market domination in all the verticals. Once you look at the analogy with their AmazonAir planes, their trucks or delivery drones and realize they are taking the parcel companies out of the equation you understand what they can do to an industry.

It feels as if Media & Entertainment is somewhat losing its status of an industry in its own right to become the enabler for wider business strategies.