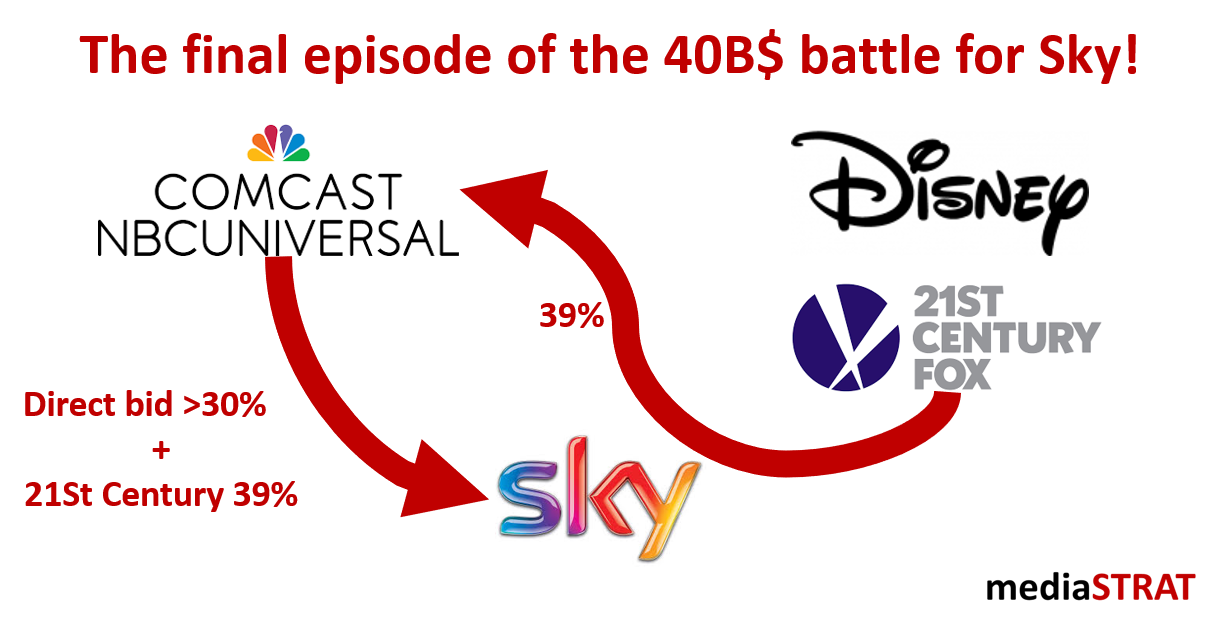 Comcast has won over Disney and the battle for the domination of the European pay TV is now over. There was no binge-watching possibility and week after week new episodes were published as in good old linear days. All the ingredients of a good epic series were present: strong charismatic characters, lots of money, great plot, tension, unexpected surprises, hangovers and a breath taking final.

I am not pretending to directly compare the leading pay TV provider that despite some erosion still holds one of the highest ARPU and lowest churn of the European media industry and secured an impressive portfolio of Sport rights with Whatsapp that never had and possibly will never have a meaningful monetization model.

As in any company M&A a significant part of valorization is based on the estimated future growth potential. Since its February 2014 19 Billion $ acquisition by facebook the number of WhatsApp users has doubled to 1,5 Billion but it’s ARPU has remained close to 0.

I let you do the math’s to compare the per subscriber price with the 40B$ paid by Comcast for sky’s 23 Million subs! There is no question that at least in its current territories Sky does not have a massive subscriber growth potential and in an era of skinny bundles and daily tickets the ARPU should not sky rocket either.

Since its creation Sky Europe was on the path to streamline its operation across the UK, Germany and Italy. The integration within Comcast brings this to all new level and a scenario similar to Discovery that is centralizing significant parts of its international operation in the US will bring some economies of scale for its media production as well as distribution technology and operations. There is definitively some savings potential, but technology represents only a fraction of the overall operating costs of a media company.

A much larger share, typically 60 to 70% are content production and acquisition related. Comcast’s backing will help sky that is facing a growing fierce competition from telecom operators on major especially football rights but despite the split in different lots it might not be enough against Amazon and Facebook that are clearly ramping up an. The evolution of the tight Sky HBO distribution relationship is another interesting piece of the equation now that HBO is part of ATT as a result of the Time Warner acquisition.

and the winner is: Rupert Murdoch

Rupert Murdoch decision to sell its 39% stake in Sky to Comcast ends a 30 years era but the almost doubling up to 13 Billion $ of Sky’s valorization over the course of this epic battle should mitigate his regrets.

As mentioned in a previous article early July the next hulu board meeting between Disney/Fox and Comcast will certainly be tense.

Stay tuned for the next season.

The future of Hulu?

I do not know if “Prediction is very difficult, especially about the future” is indeed…

Before diving into the topic, I would like to thank you for the views, likes…