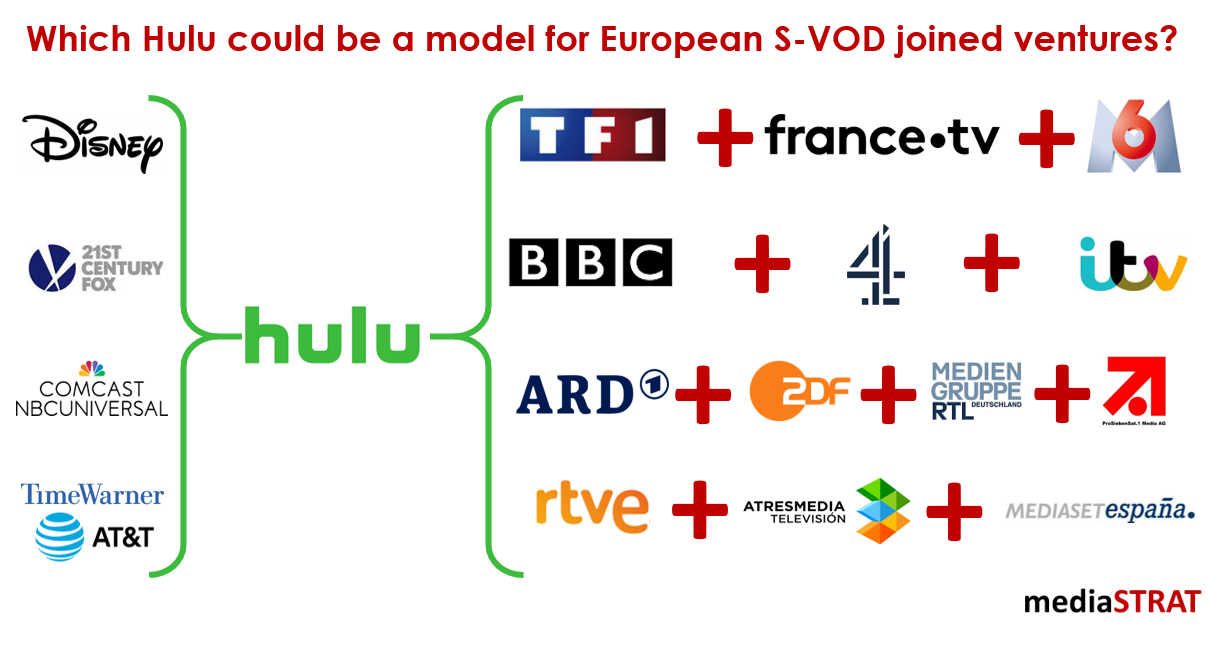 I wrote quite a few posts on the necessity for European media organization to team up in an OTT landscape that changes the multinational and where scale is a more significant success factor then regionalization. Many initiatives describe themselves as the French, Spanish, German or British Hulu. It is mainly because similarly to Hulu they are joined ventures of existing broadcast media organizations.

Hulu was created 10 years ago as a joined venture between Disney (30%), 21st Century Fox (30%), NBC U now part of Comcast (30%) and Time Warner (10%). For most of the time of its Gen 1 Hulu was primarily a further distribution outlet for existing licensed content already distributed over linear channels of its shareholders. A gen 1 Hulu model would face the same differentiation challenges and governance issues.

In its Gen 2 starting 2017 Hulu decided to invest in high value exclusive content. This fundamental strategical change was rewarded by a doubling of its subscribers to reach 25 Million at the end of 2018. When comparing with Amazon’s 101 Million or Netflix’s 130 Million one need to keep in mind that the service is only available in the US. A gen 2 Hulu model would offer despite the same governance issues a clear differentiating editorial value proposition.

The Hulu Gen 3 is the result of the acquisition of 21st Century by Disney. The fact that three of the founding global media groups have been in the meantime acquired (NBC-Universal by Comcast that also recently acquired Sky, Time Warner by AT&T and Fox by Disney) reflects the ongoing massive restructuring of the market that for some reason has not really reached Europe at least for the moment. A gen 3 Hulu model would mean that regional or pan regional European media groups have emerged through acquisitions or that transcontinental alliances similar to the Discovery and ProSiebenSat.1 one have become a reality. I am not sure that the regional or European antitrust authorities will let this happen with the possible consequence of US groups becoming even more dominant.

A pan European service would also possibly need, alongside legislative and language challenges, to cope with a combination of private and public media organizations with quite different objectives making a balanced joined venture operation quite difficult to manage and operate.

Even if the analysis shows a growing trend toward multiple subscriptions it is unlikely, except if a new bundling aggregation layer emerges likely from an operator like the recent Magenta TV from Deutsche Telekom, that viewers are going to go beyond 2 or 3. If one is likely to go to go to a scripted movie/series centric service like Amazon, Netflix or Disney+ and another possibly to a sport centric service like Sky, Canal+, beIN Sports, BT Sport or DAZN the fight for the last one will be even harsher with very high churn rates among Amazon channels and multiple niche/special interest S-VOD services.

The coming two years will be crucial for the market structuring and consolidation. This is a relatively short window for European media organizations and legislators to take the lead and get moving to remain relevant in the global competition for eyeballs as well as advertisement and subscription money.