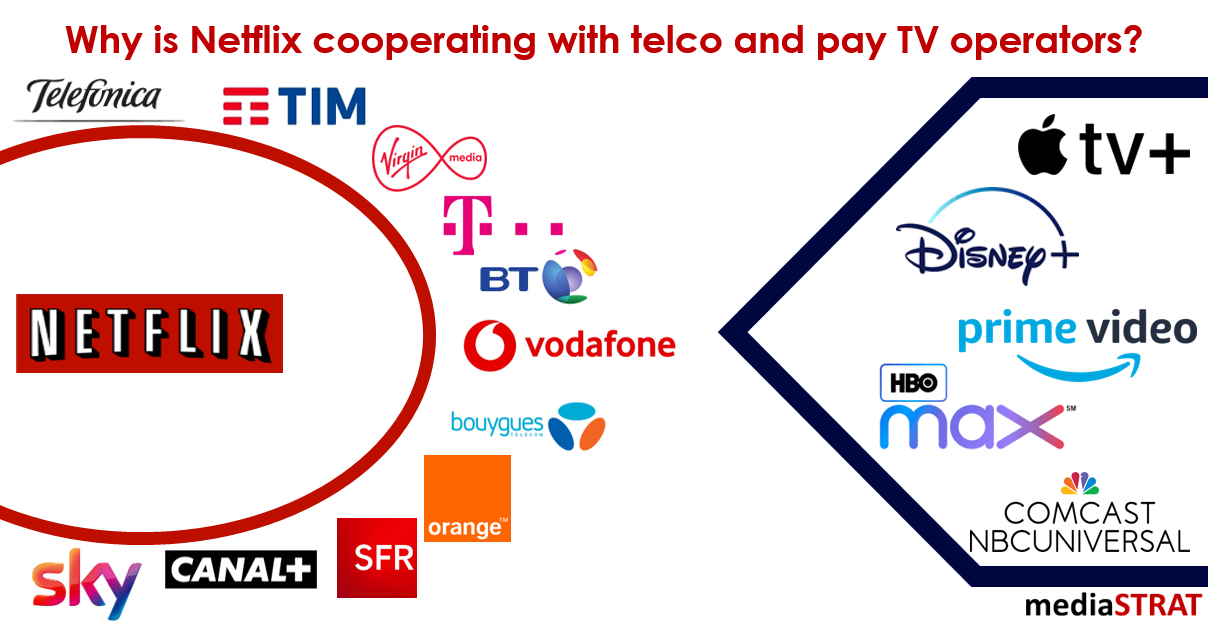 The recent announcement of a possible imminent deal between Canal+ and Netflix has triggered many discussions on the motivations of such a deal. In a bigger picture Netflix has already signed up numerous agreements with operators including Sky to distribute its service.

What’s in for Canal+

The question is not so much what’s in for Canal+ that in France has been suffering from heavy subscribers’ losses for the past few years, lost significant sports rights, killed its VOD service Canal Play and is looking to reposition itself both in Africa as well as in Europe with investments like the recent M7 acquisition.

Bundling Netflix is a way to try and restore its ARPU and regain its position as the aggregator of choice for the most desirable entertainment and sports contents building on the combination between two very strong brands.

What’s in for operators?

For operators which voice and data service are perceived as utility moving to quadruple play is essential. Many larger one’s morph into a hybrid between telco and media company by launching their own media services possibly through acquisitions of existing VOD services or at least directly licensing exclusive content as well as becoming a marketplace for third party streaming services.

It is a way for telcos to take a cut on the revenue generated through third party VOD services and not simply carry for free these bandwidth hungry services due to the net neutrality regulation or even worth being finger pointed for throttling them.

For some the Netflix integration is primarily marketing driven. Bundles allow operators to generate revenue especially through carrier billing and more importantly help push subscribers toward higher speed more profitable data plans. Others have invested in a cross-platform search and recommendation layer sitting above all services to offer a seamless experience to their users and gather more usage data.

What’s in for Netflix?

For Netflix signing distribution partnerships with pay TV and telecommunication operators is also an urging matter to further increase its subscriber base as competing services from Disney & Co. are coming up on the horizon. These are likely to follow the same B2B2C route to be present on as many platforms as possible to rapidely reach a wider audience.

The announcement of the 2$ per month subscription increase that the financial community had originally seen as a brilliant way to cut on the Netflix losses backfired shortly after it turned out that the churn had gone up and the number of US subscribers seem to have reached a plateau. Simply imagine what 151 Million subscribers x 2$ x 12 months = 3,6 B$ would have done to Netflix’s financials! Unfortunately, what Apple managed to do with the I Phone: increase the price without very significant value add for the consumer to increase its margin and compensate for lower volumes dis not work that well for Netflix.

The competition for eyeballs ie. direct subscriber relationship is in full motion among frenemies. Ultimately as the market fragments the likelihood of one or a few of the global players to emerge as meta aggregators growth. Will it be a media company, an operator, a retailer, a software, hardware or OS vendor or possibly a search engine?